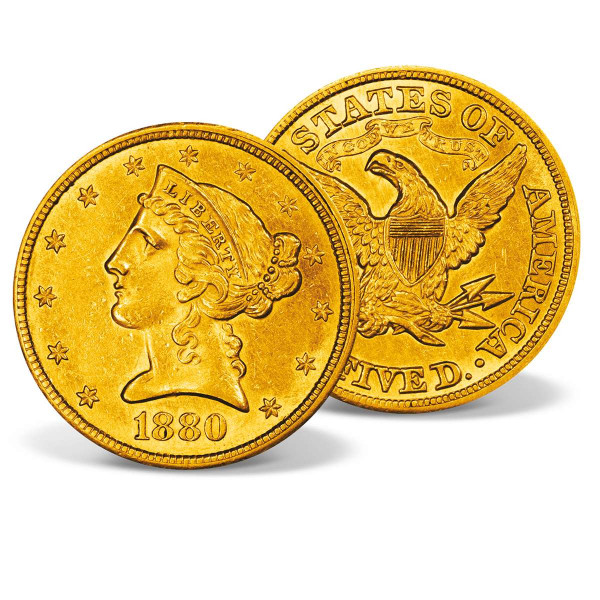 The Liberty Half Eagle holds the distinction of being the only coin of any type or denomination to be struck at all seven branches of the U.S. Mint. The 1880 Liberty Half Eagle depicts the famous image of Liberty on the obverse. Her coronet, or crown, bears the word"LIBERTY" in bold letters. The reverse features the Great Seal of the United States. These historic coins contain .2419 troy oz. ofpure 24k gold.

Congress authorized the U.S. Mint to coin the $5 gold piece, or Half Eagle, on April 2, 1792, the same day it authorized the creation of the Mint itself.

The HalfEagle was the first gold coin minted by the U.S. Government. It also has the distinction of being the only coin minted at all seven branches of the U.S. Mint. Produced for circulation from 1795 until1929, the Gold Half Eagle had many design changes over the course of its 134-year existence. However, the Liberty Head "Coronet Type" design with motto - as depicted in the 1880 issue - remains one ofthe most recognized and treasured variations.
Originally designed by Christian Gobrecht in 1839, it remained virtually unchanged until the Act of 1866 added the motto "IN GOD WE TRUST" to all coins. Chief Engraver James Longacre added the slogan to a ribbon on the reverse and it remained that way until the Liberty Head design was officially retired in 1908.

Today, the $5 Gold Liberty Half Eagle is considered the "Holy Grail" of coin collecting for its rarity, value and historic significance.