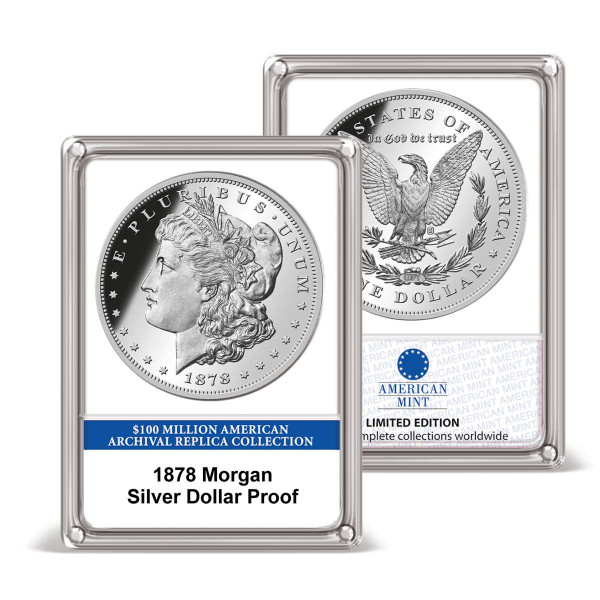 Tweet
Share
Description
Description
The Morgan Dollar, named after its designer, George T. Morgan, was minted during one of the most... more
Close menu
1878 Morgan Silver Dollar Proof Archival Edition

Rare 1878 Morgan Dollars in Mint State (MS) condition have been known to fetch more than $12,000 at auction. With this authentic reproduction, you can have your own Morgan Dollar at a fraction of the cost. Our product faithfully captures the look and feel of the original 1878 Morgan Dollar.

Available exclusively from American Mint, this magnificent proof is meticulously reproduced from the highly coveted 1878 Morgan Silver Dollar. Minted to the highest quality "Proof" standard, it comes encased in our NumiShield Protective Case to preserve its luster for years to come. Like all AMERICAN MINT products, we stand behind our Morgan Dollar reproductions with a comprehensive satisfaction guarantee. Place your order online to own this faithful reproduction of an important piece of American numismatic history.

Your Source for Collectible Coins Whenit comes to value and quality, there's no better source for collectible reproductions than American Mint. Find out why more than 10 million people globally have made us their first choice for rare coins and other items. Place your order online today for fast, affordable shipping.