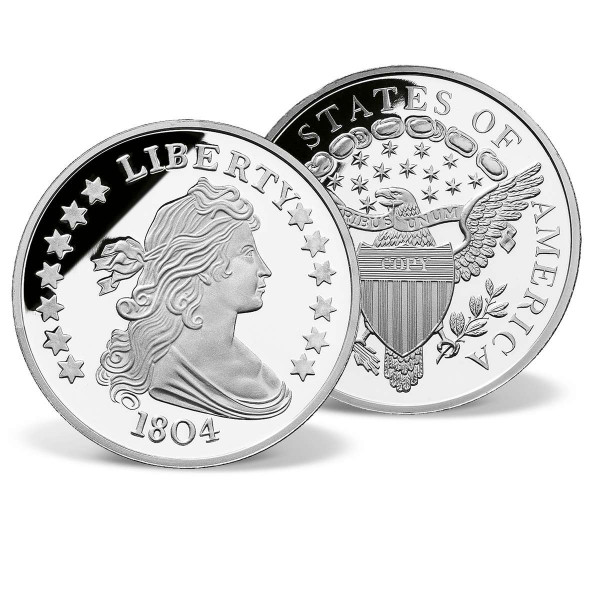 Tweet
Share
Description Satisfaction Guarantee
Description
Undoubtedly the most intriguing coin in American history, the first 1804 Silver Dollar was... more
Close menu
1804 $1 "Class 1" King of Siam Replica Coin
Undoubtedly the most intriguing coin in American history, the first 1804 Silver Dollar was actually minted in 1834 as part of a set of proofs to be presented as gifts to Asian rulers by President Andrew Jackson. Using the last recorded date of production, the new silver dollars were dated 1804 despite being struck thirty years later. Only eight of these coins were minted in 1834, including one presented in a set of coins given to the King of Siam. The set was presented to King Ph'ra Nang Klo in the spring of 1836, and it remained in the family for generations. The set contains one of the eight original 1804 "Class 1" silver dollars, along with other numismatic treasures struck in 1834. Called the "King of American Coins by numismatic experts, an 1804 Silver Dollar sold in 2001 for an astounding $4 million! Between 1858 and 1860, Theodore Eckfeldt, a U.S. Mint employee, illegally produced seven more 1804 Silver Dollars which he sold off. These became known as the Class II and Class III types. All fifteen of the 1804 Silver Dollars have been accounted for and exist in either museums or private collections. Coveted by collectors, but essentially impossible to own, the last time one of these amazing treasures was sold, it went for over $4 million! Meticulously reproduced in exacting detail from the King of Siam specimen, this brilliant replica of the 1804 Silver Dollaris minted to the highest quality "Proof  standard and luxuriously layered in .999 pure silver.