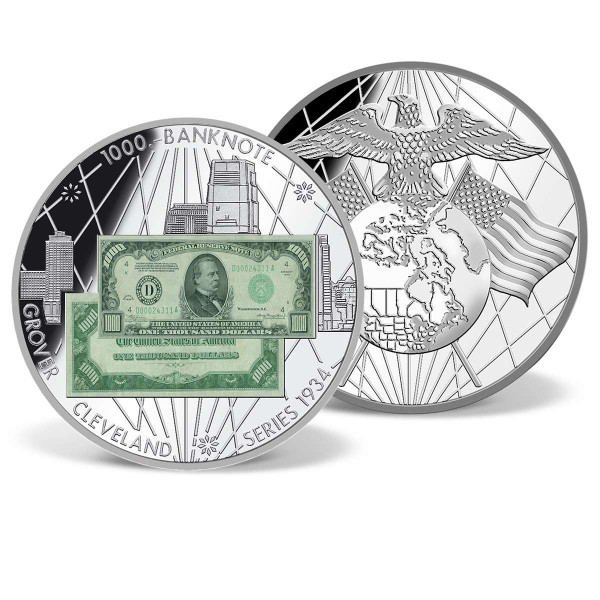 First issued in 1861, the $1,000 bill originally featured Union General William T. Sherman. These large denomination banknotes - along with $500 and $5,000 bills - were primarily issued for transactions between banks and government agencies.

At the end of World War II, the use of checks and wire transfers became more popular, andproduction of all large denomination bills ceased in 1945 when they were no longer necessary for bank transfers. While these notes are still considered legal tender and may be found in circulation today, the Federal Reserve Bank removes them from circulation and destroys them as they are received.

Who Was Grover Cleveland? Stephen Grover Cleveland's political career began in1870 with his election as sheriff of Erie County, New York. His success in this role helped him become the mayor of Buffalo in 1882, and he earned a reputation for fighting against the interests of the city's entrenched political machines. His willingness to battle corruption catapulted him to the governor's office in New York before winning the nomination of the Democratic party to run for the presidency in 1884.

The only U.S. President to serve non-consecutive terms, Grover Cleveland acted as a protector of the federal government, focusing his efforts on ridding the system of special interest appointments and making sure officials earned their positions through merit. He entered into his second presidency in the midst of the worst depression the country had ever known and didhis best to restore the economy.

Our Grover Cleveland Coin Honors the Legacy of a True American Patriot Although the U.S. Treasury no longer issues a $1,000 bill, you can own the beautiful Grover Cleveland thousand dollar bill coin from American Mint. Our brilliant uncirculated-quality copper-nickel piece features a full-color inlay of the original Grover Cleveland $1,000bill on the obverse. The coin's reverse offers a portrayal of an American eagle perched majestically atop a globe flanked by two U.S. flags. We believe there's no better way to pay homage to PresidentCleveland and the currency that bore his likeness.

American Mint: A Reliable Partner for All Your Collecting Needs Our Grover Cleveland coin epitomizes our commitment to beinga trusted partner for all our customers. We strive to produce coins and collectibles that adhere to the highest standards for quality and craftsmanship. We want you to experience the joy that comes from owning and displaying a one-of-a-kind piece that will become a highlight of your collection.

Purchase Your Grover Cleveland $1,000 Bill Coin at a Fantastic Online Price At American Mint, we also do our best to make building an enviable coin collection affordable for everyone. Purchase your Grover Cleveland coin online right now at an amazingly low price. Combine this piece with other items in our inventory, and you could be eligible for free shipping and handling, which applies to all orders of at least $150. You can also pay in interest-free installments when you spend more than $100.

Purchase Your Grover Cleveland Thousand Dollar Bill Coin Today Order the remarkable Grover Cleveland coin right here at our user-friendly, secure e-commerce site. You can also give us a call at 1-877-807-MINT from 8 a.m. to 8 p.m. EST Monday through Friday for friendly, personalized assistance. And don't forget to check out our entire collection of presidential coins and other outstanding collectibles like commemorative full-color baseballs, fine jewelry, Bowie knives, and more.